Ironworks, the next chapter for Holbeck’s Urban Village, begins on site 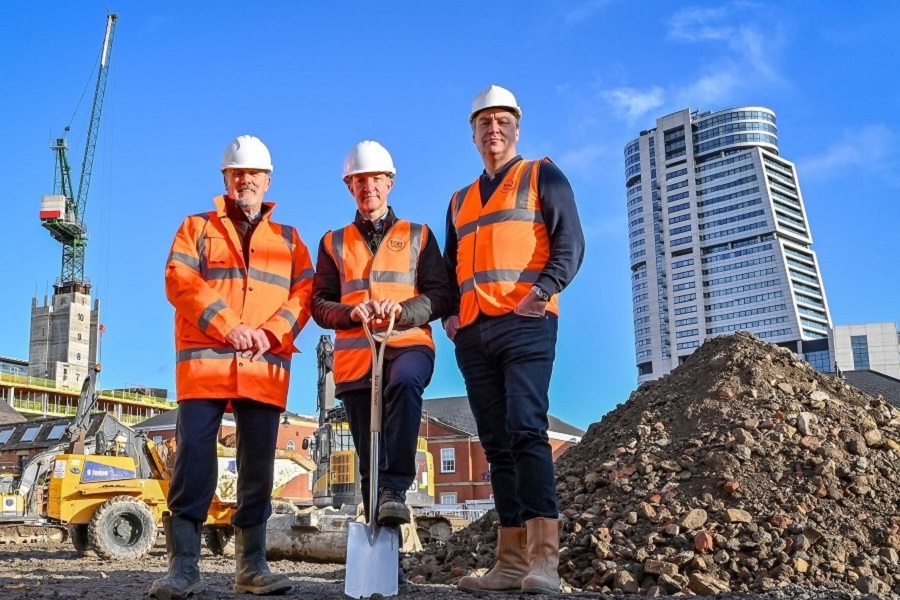 Ironworks, the next chapter for Holbeck’s Urban Village, begins on site

Posted on 14 Jan in Projects 0 Comments

The face of Leeds’ Holbeck Urban Village is about to get a beautiful new look as construction work at the award-winning Ironworks residential development by PfP igloo gets underway.

Consisting of 68 new energy efficient homes, including 15 townhouses, which are available to buy, the development sits in the heart of the city’s emerging South Bank area, which will expand the city centre southwards creating a new community including thousands of homes and jobs along with a new park.

Recognised as one of the UK’s best neighbourhoods, the Holbeck Urban Village area has become a magnet for creative industries. The development retains a tranquil feel while providing easy access to the city’s vibrant social and cultural life, mainline railway station and amenities such as the Leeds and Liverpool Canal.

Designed by local architect, Nick Brown Architects, the visually striking and thoughtfully conceived apartments and townhouses are arranged within a mill-style building, with ‘chimneys’ containing lift shafts and stair cores. Including one and two-bedroom apartments, two and three-bedroom townhouses and two three-bedroom penthouses with large private terraces, the development will also include two ground floor commercial units and parking.

The new homes will be clustered around a private courtyard, and the main building will be clad in red brick – a design nod to the Victorian mill buildings in the area which were once the beating heart of the city’s industrial past. Other design details such as ‘rusted’ Corten steel panels add a 21st Century aesthetic.

The project is funded by PfP Capital, part of the Places for People Group, and is being developed against a backdrop of stunningly restored industrial heritage architecture, the David Street site sits close to clusters of bars and restaurants such as Granary Wharf.  Every home will have access to outdoor space via private balconies, roof-top terraces, hidden gardens and public open spaces which will help place wellbeing at the centre of a bustling community.

Driven by igloo’s core belief of delivering for people, place and planet, the homes will benefit from a minimum of 10 per cent solar power generated by photo voltaic tiles situated on the undulating roofline, while being orientated to optimise natural light into the homes. The buildings are also designed to be energy efficient with electric heating and highly insulated walls and ceilings.

To encourage the community to consider the planet, there are 64 cycle spaces in the development, alongside resident car parking, including electric car charging points and the infrastructure installed to provide more in the future.

Honor Massarella, Development Director at igloo, said: “Leeds is a city which is dramatically on the up and Holbeck is a crucial part of that new confidence. The area has all the allure of the world’s coolest neighbourhoods but it retains a distinctively individual feel and atmosphere. Our goal is to add to that atmosphere and create a sustainable community of homeowners who have a meaningful stake in the area’s future.

“Leeds is alive with confidence and Holbeck is at the heart of that. The area has all the allure and vibrancy of the world’s coolest neighbourhoods and retains an individually distinctive feel. Our goal is to understand the people, the atmosphere and the fabric of a neighbourhood and create something that works to create a community together. Our design process has, I believe, created something that is already standing out and with some of the city’s best loved independent food and drink venues on their doorstep, the Ironworks community will certainly feel part of something special.”

Adds John Tatham from PfP Capital: “we are delighted to start on site with Ironworks. This is the first new development following Places for People’s investment in PfP igloo managed by igloo and PfP Capital. As we start on site on a number of new developments across the country, Ironworks is an exemplar setting the standard as we increase investment in the Partnership”.

Jonathan Morgan, the residential agent for the scheme, said: ‘’Of the many schemes we have sold and rented in Leeds city centre over the past two decades, very few have been conceived with such care and attention to detail as The Ironworks.  PfP igloo has an established reputation as a developer with a soul and an agenda beyond profit and as the scheme takes shape, this will become evident. This is one of very few new developments which will be delivered specifically for homemakers and buyers can take confidence from the developer’s track record in delivering great new places to live. The layout and specification of each apartment and house has been interrogated from every angle to ensure that they are as practical, livable and exciting as possible and we cannot wait to bring the Ironworks to market’’.

The development is being constructed by Esh Build, a division of Esh Construction and has been designed by Leeds-based Nick Brown Architects with structural engineering by Civic Engineers.

Ironworks was recognised at the Housing Design Awards 2019 and marks a return of development manager igloo to Holbeck Urban Village. Applying its Footprint Policy focusing investment to benefit people, place and planet, igloo has delivered some of the most recognised impactful schemes in the UK. Named the UK and Ireland’s ‘Best Neighbourhood’ at the 2015 Urbanism Awards, Holbeck Urban Village, or HUV as it has become known, is now on the cusp of a surge in activity as a key part of Leeds’ South Bank – one of the largest regeneration opportunities in Europe which is set to double the size of Leeds city centre.

The total investment in the Ironworks development by PfP Capital amounts to almost £20M with homes expected to be completed and occupied by the summer of 2021. The first homes are expected to be released for sale off-plan in Spring 2020. Potential purchasers can register their interest now at www.ironworksleeds.co.uk